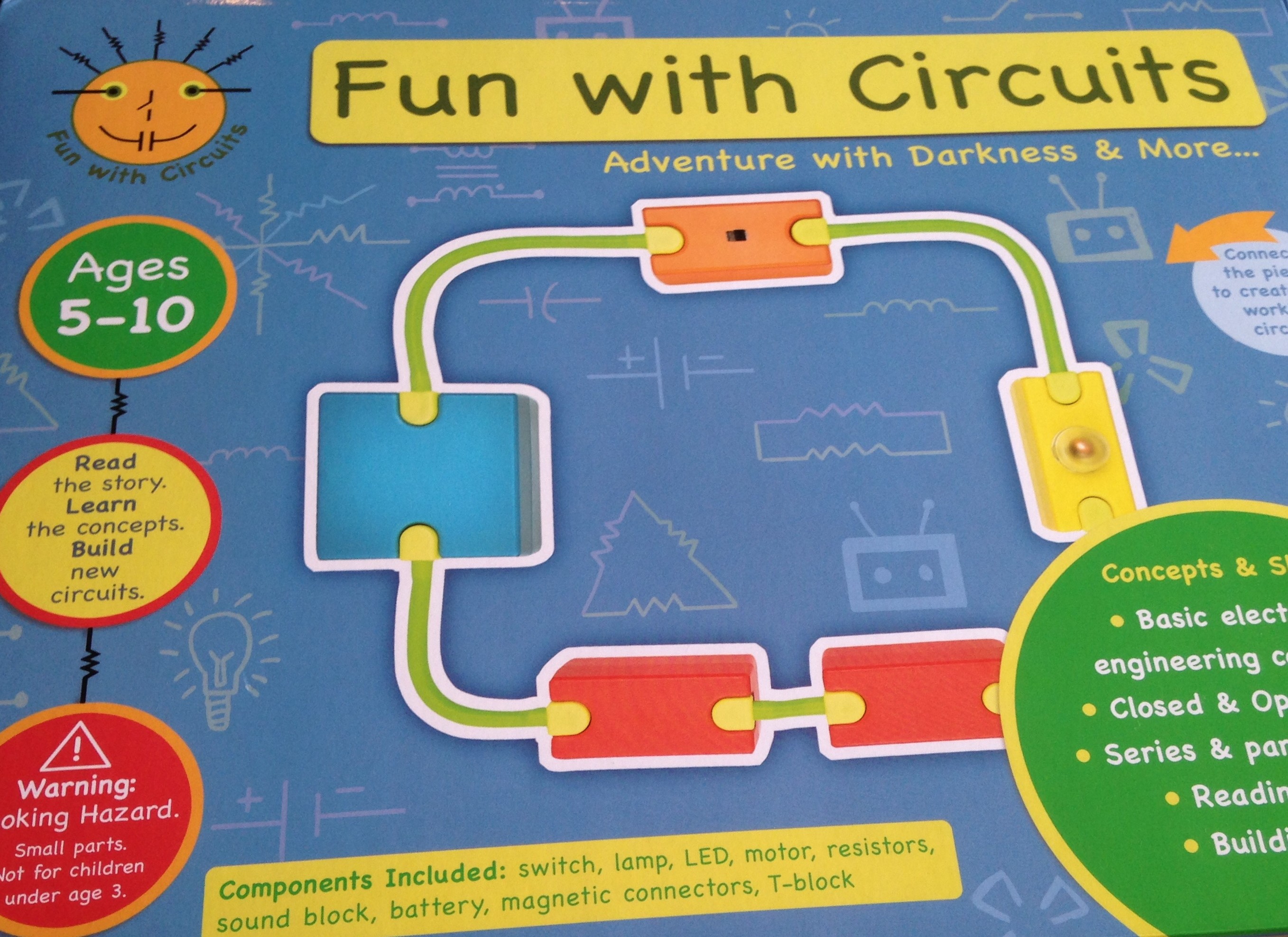 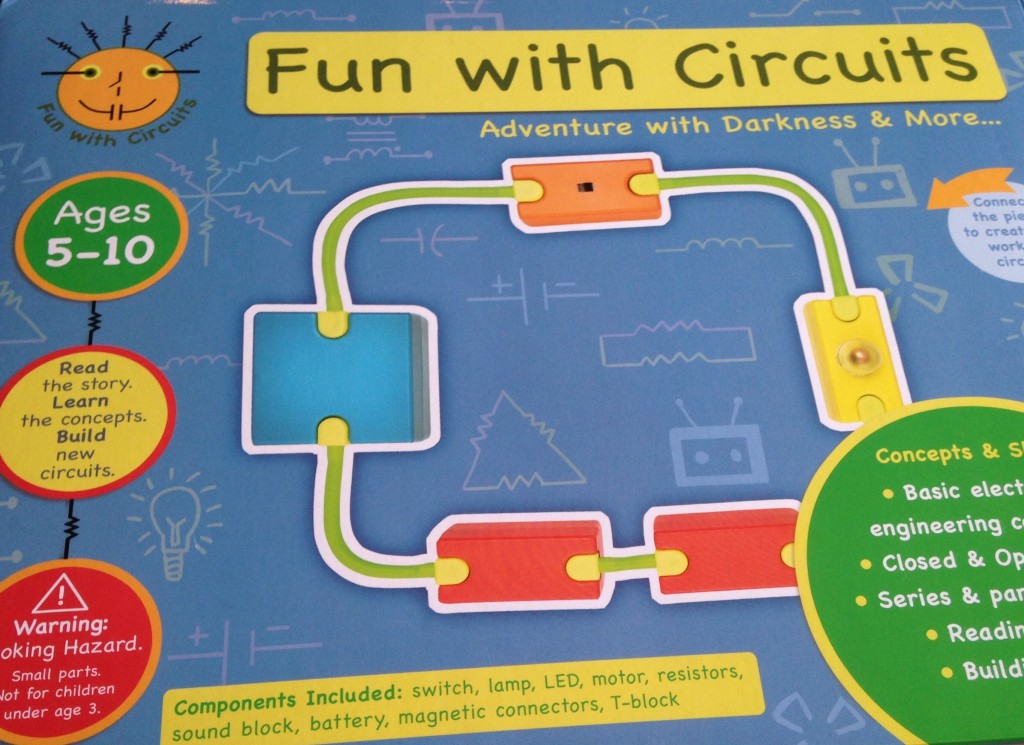 Nearly two years ago myself of Dual2 Ltd began to help Joytsna of Fun with Circuits to develop an educational game for 5-10 years old. This game is a great idea and Dual2 ltd was lucky enough to be involved at the very start by helping the Fun with Circuits team to get their thoughts and design into reality by designing the product for manufacture. Since then Fun with Circuits achieved group funding via Kickstarter to enable actual production of the game.

The title of the game says it all, while having fun children get to understand the basics of electrical circuits by the use of components, wires and a story book. The story, guide the users through an exciting adventure, while cleverly explaining how batteries, a switch, LED, lamp, fan, resistors and wire connectors can make many different electrical circuits. 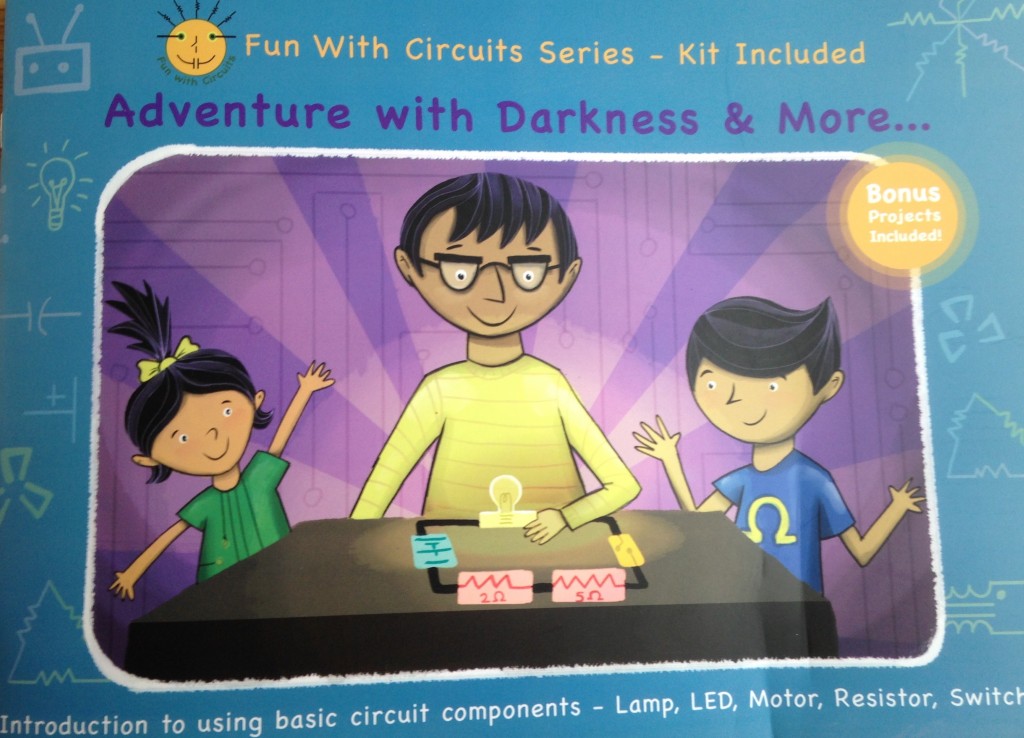 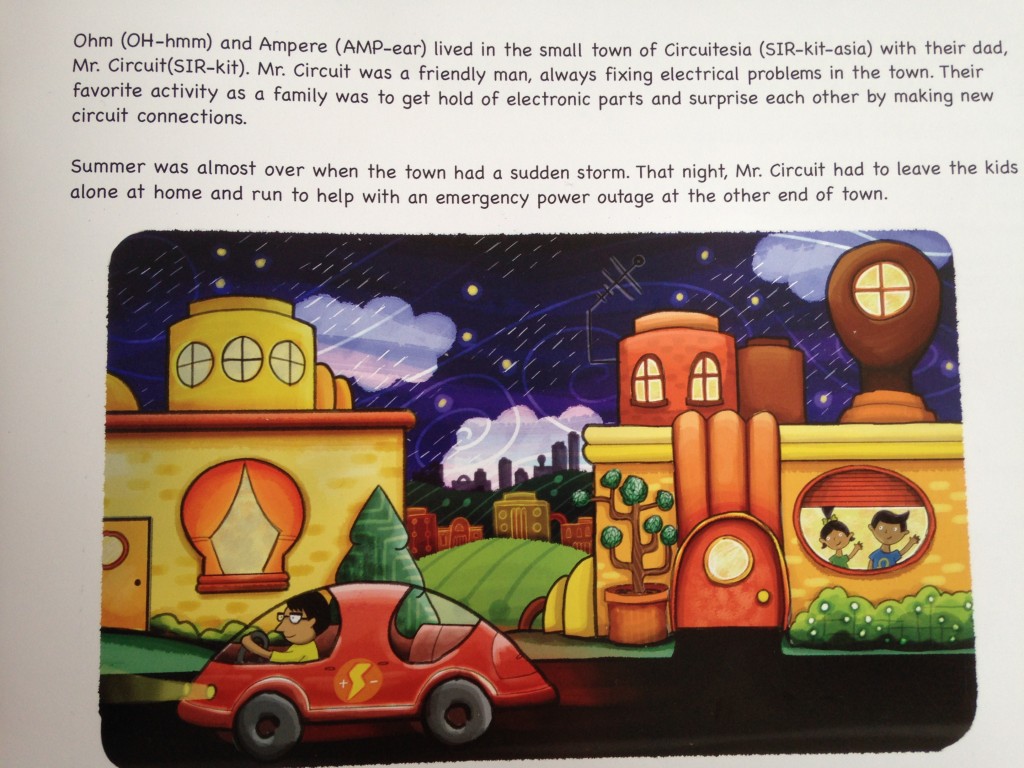 The story is based on two children called Ohm and Ampere and their father Mr. Circuit who live in Circuitesia. They create their own light circuit, reduce the brightness by introducing a resistor. Explanations of the components quoted from the book….”A resistor is like a closed door with holes. Current can only pass through the holes. The number of holes decreases as the value of the resistor becomes larger.” Ohm comes up with a problem….why didn’t the LED light up when introduced into a circuit? Ohm’s Father Mr Circuit explains that the LED is a “one way road, it only allows current to flow in only one direction.”  So what do you do, just reverse the battery connection, simple. As well as the story there are projects to explain parallel and series circuits, Conductor and Insulators and a great glossary showing the electrical symbols of the components in use. 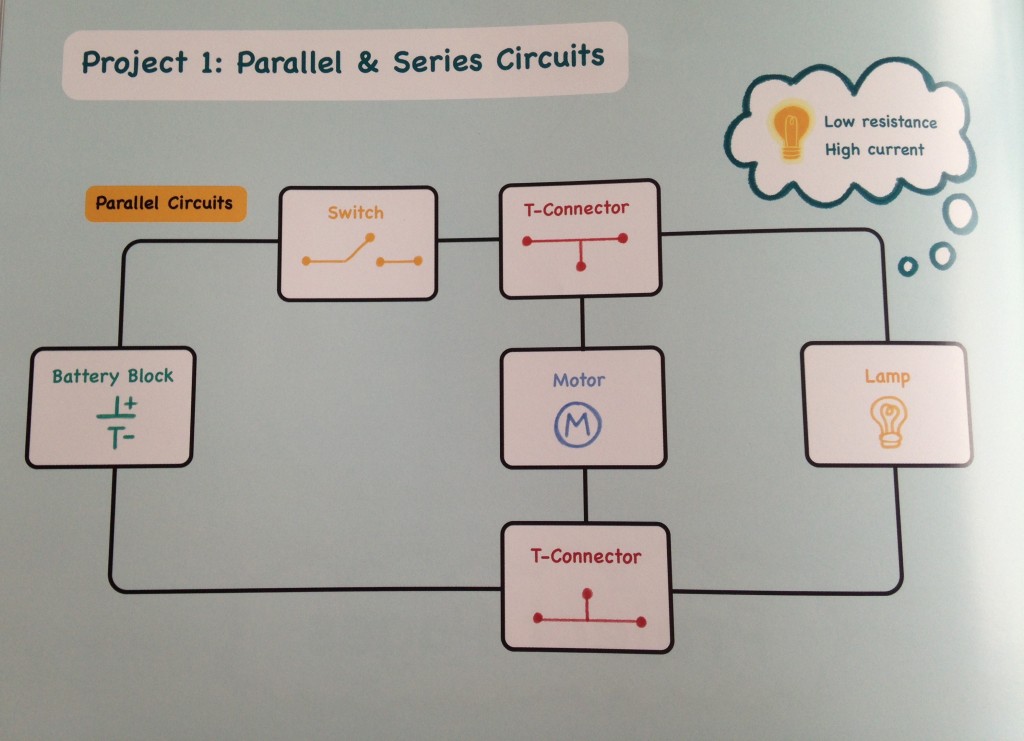 I backed the Kickstarter programme and received the Fun with Circuits game just before Christmas 2015. I wanted to get the educational game for my Grandchildren Ivy (3 years) and Edward (1 year), and thought it would be a great investment for when they get older to use it. Ok, maybe Edward is too young but was looking forward to show Ivy the Fun with Circuits Game/Kit in the near future. Well this weekend I thought I’d show Ivy the game for the first time just to see if she was interested. Remember, she is only 3 years old and the game is for 5-10 years. Well I need not worry whether she liked the game or not. Her little eyes lit up (pardon the pun) when she saw the colourful box. I opened the box and Ivy immediately grabbed the switch block and clicked the switch on and off. “What does this do Pops” she said. So I thought lets go with it, get the book and the kit of components out on the table and see with a bit of guidance by myself what Ivy can do. Well I was amazed and here are the pictures to prove it. 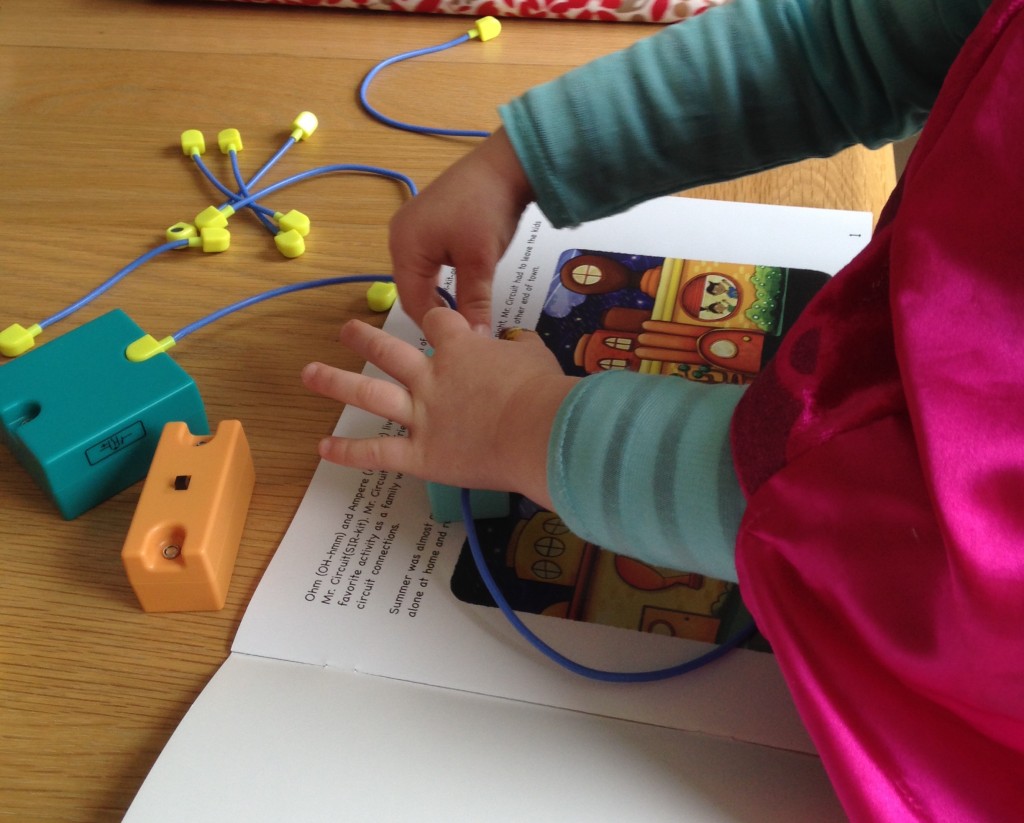 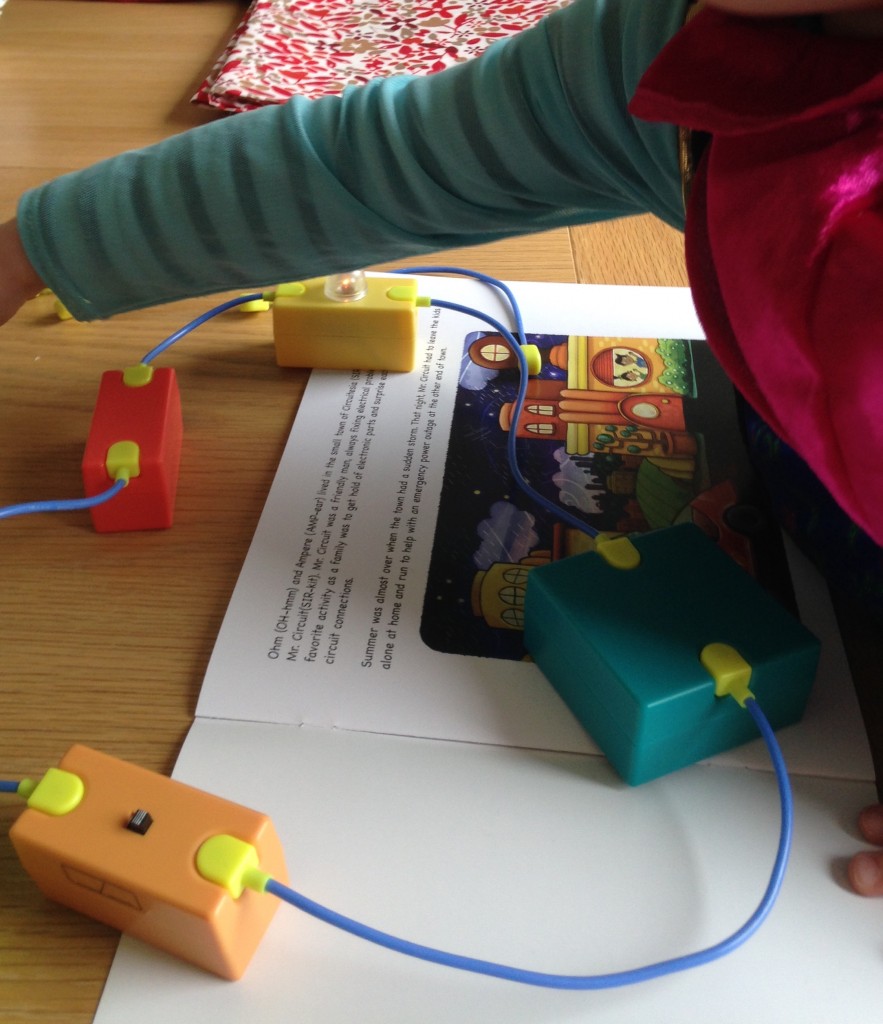 Jumped straight into the use of a resistor. 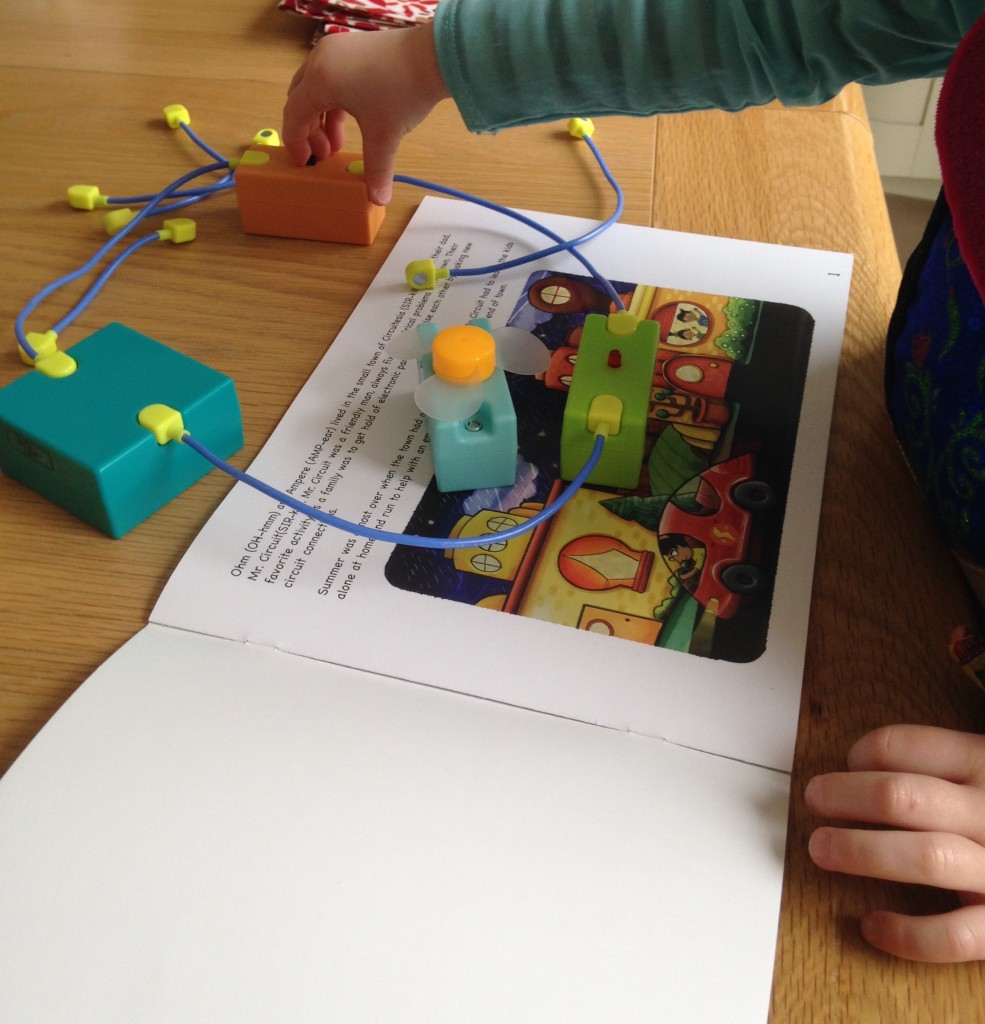 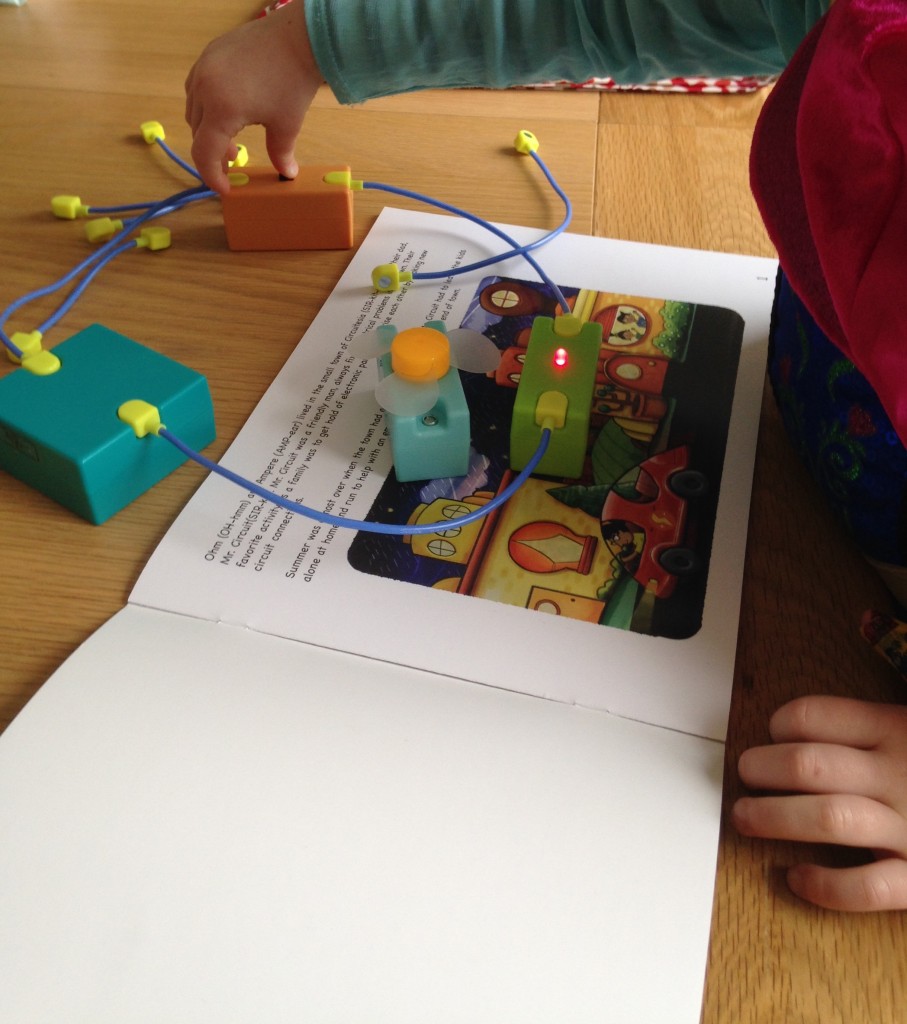 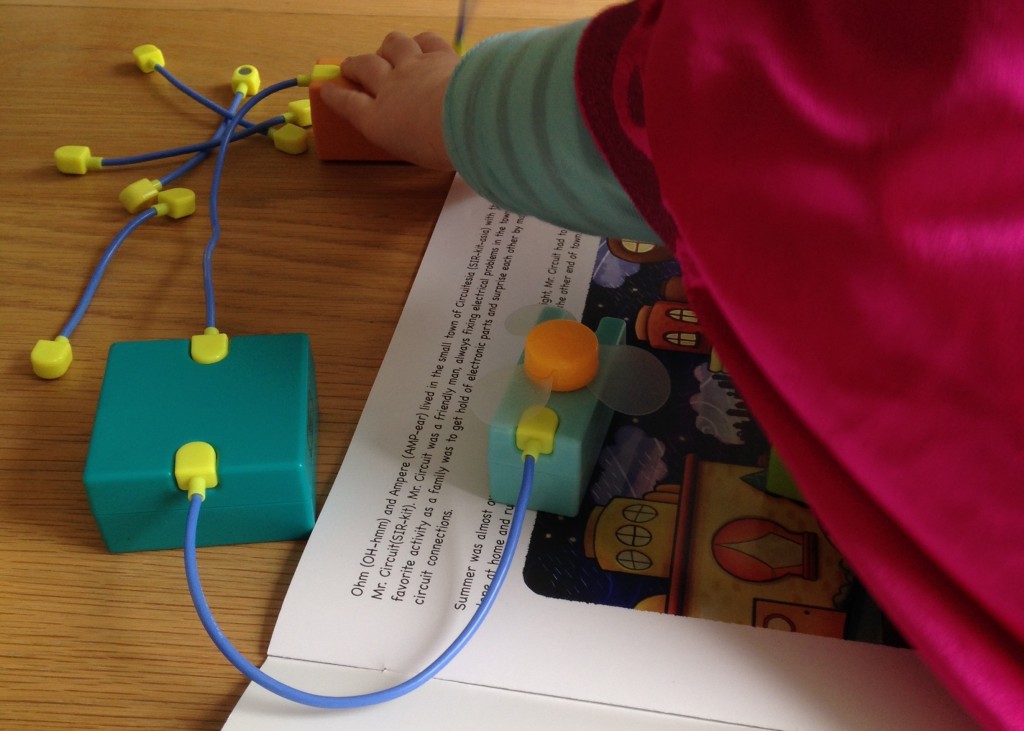 The fan looks interesting. I may like to add that the fan blades are a type of fabric so won’t harm if little fingers get too close. 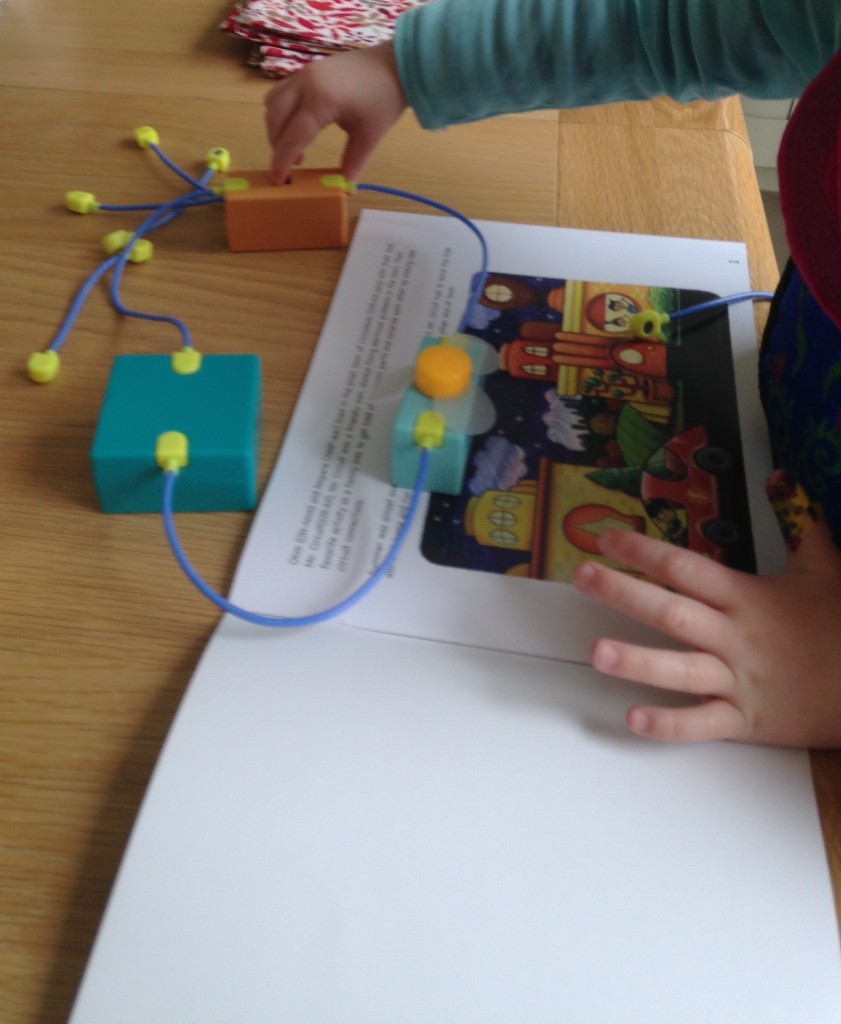 All connected and on with the switch 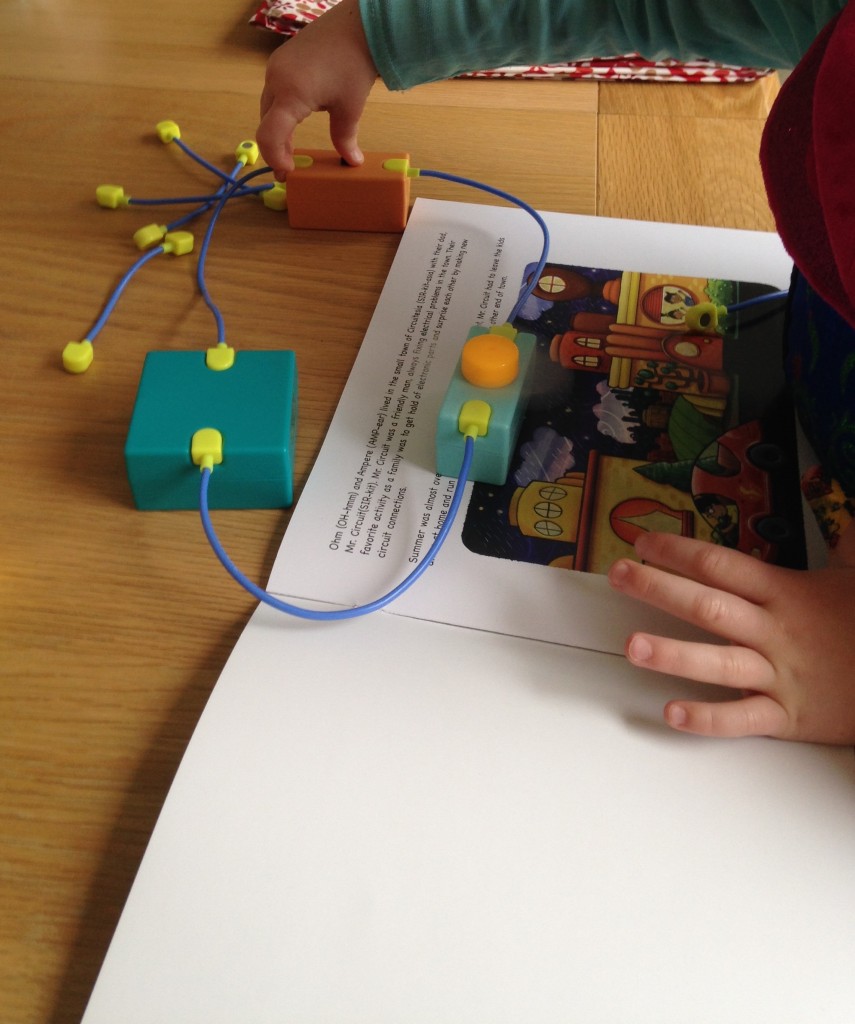 Wow, the fan is cool. 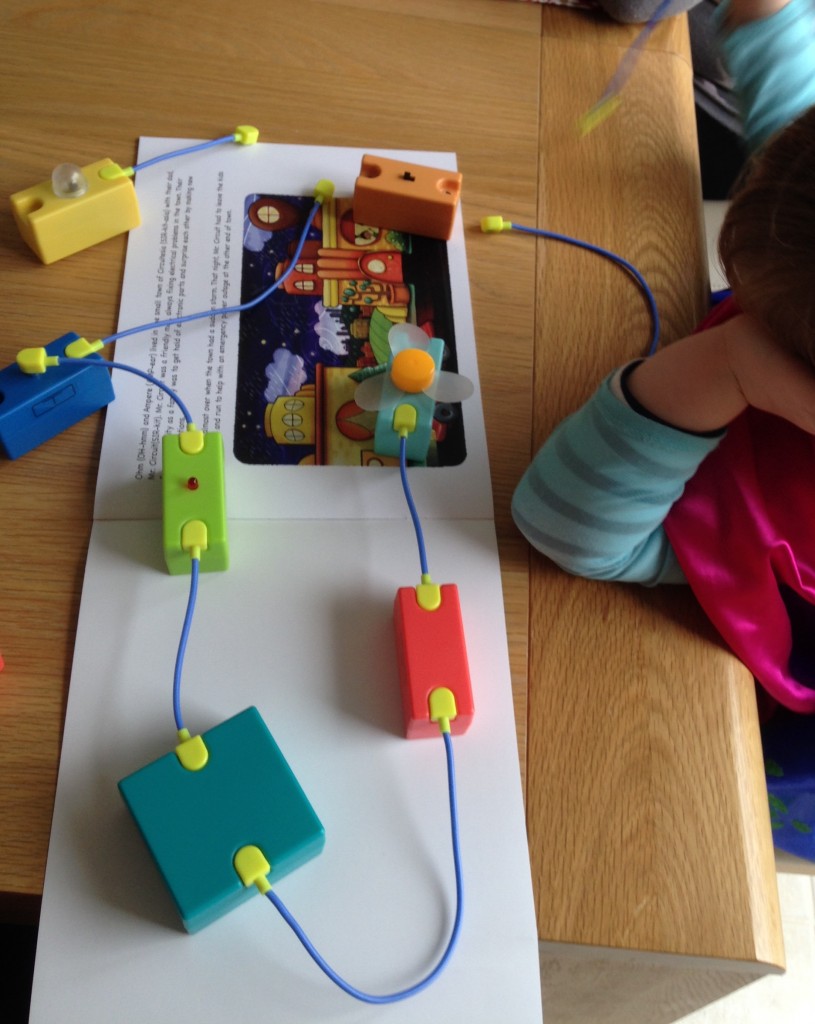 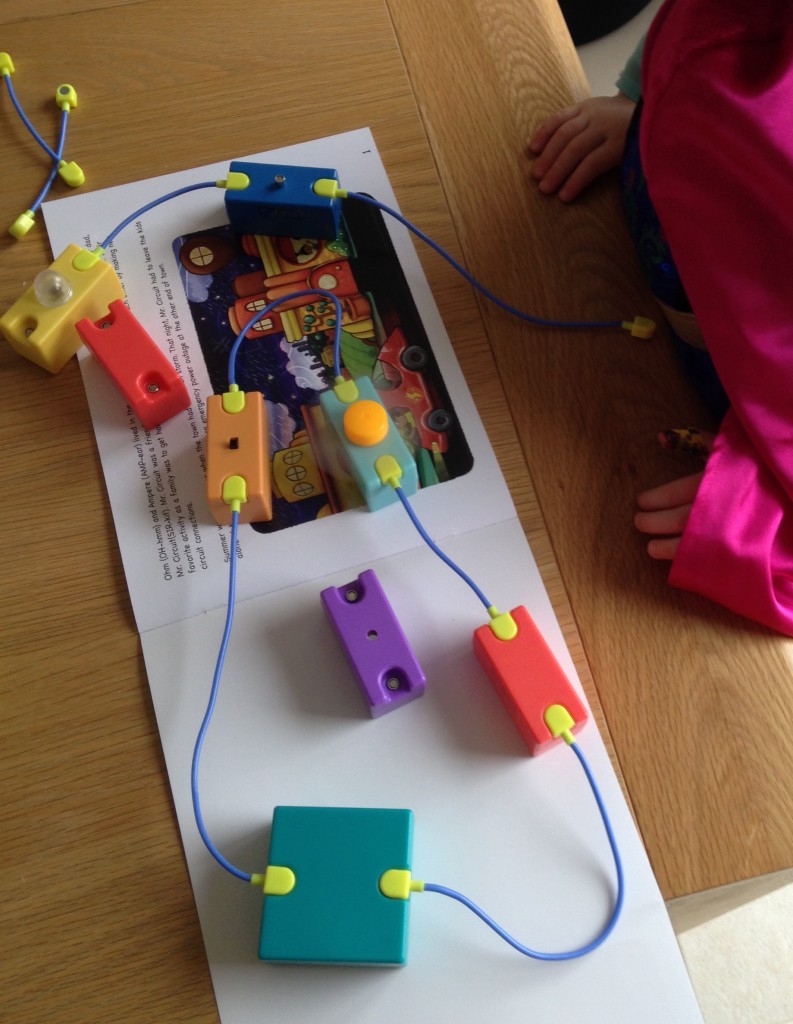 We even slowed down the fan by using a resistor. 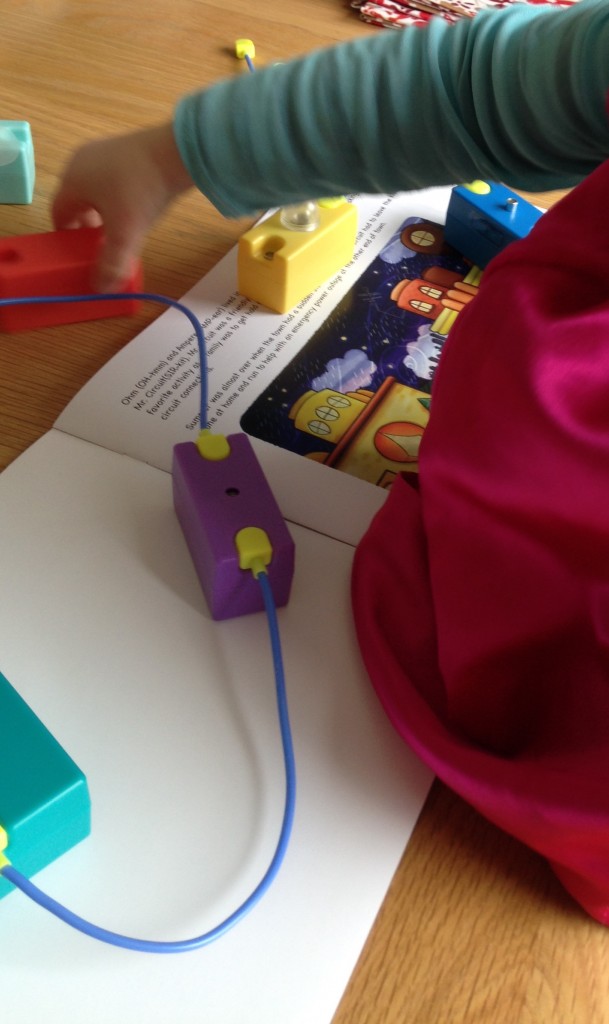 A Christmas song was a nice surprise. 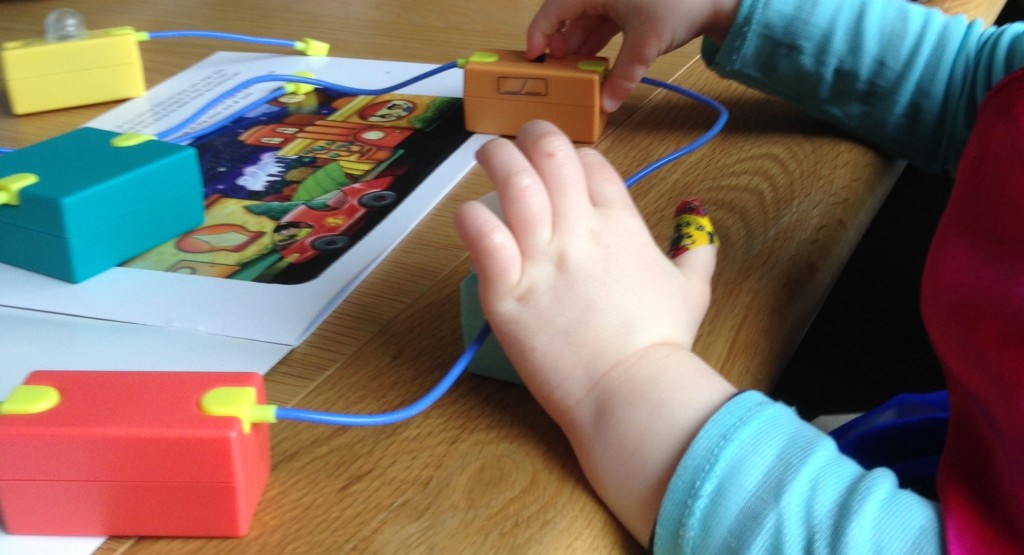 That switch is going to get worn out. 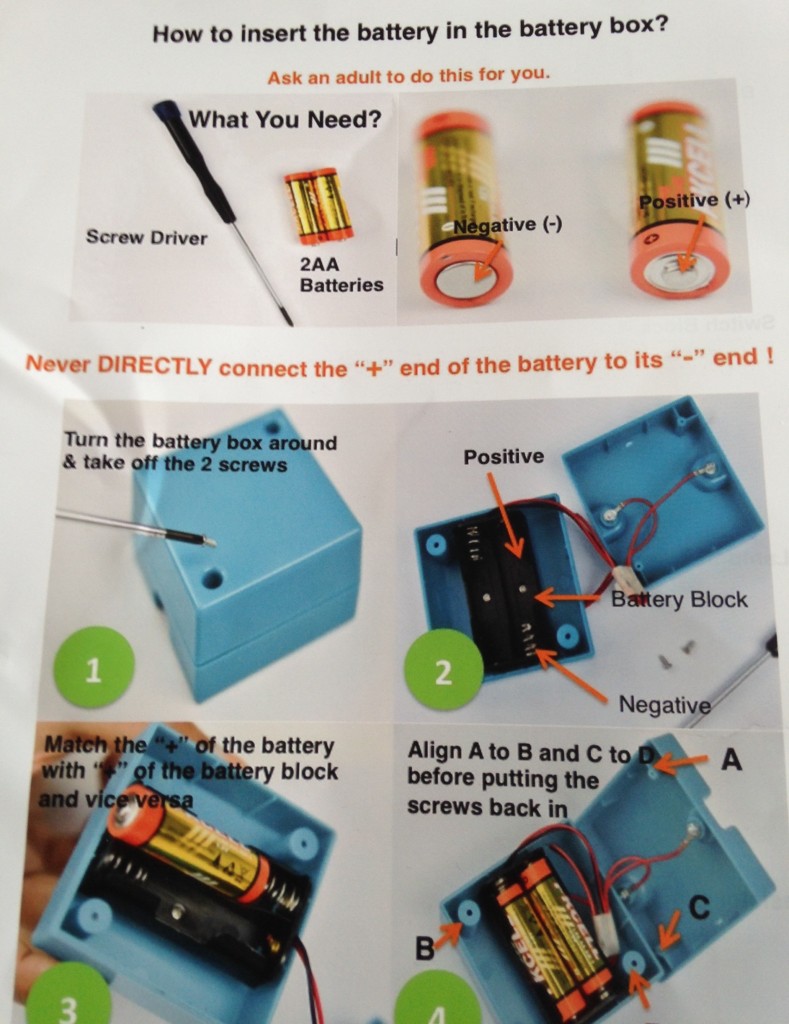 This is for the adults before playing with the kit. 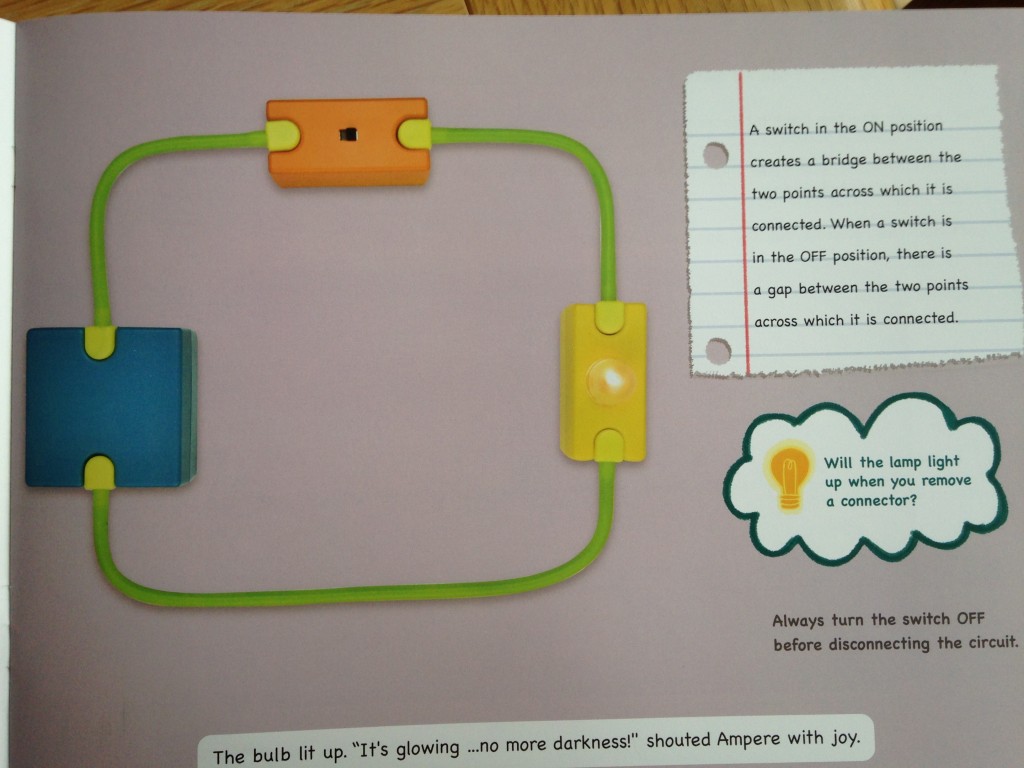 Showing a circuit example from the book.

Ivy was not quite old enough to follow the story, but it won’t be long before this will add to her excitement of using the game. I feel the bold colours of the component blocks attracted Ivy to play the game and I know it’s going to be Fun with Circuits time again soon.

I must point out that it is the intention of Fun with Circuits for the game/kit to be used by 5 to 10 year old Children. It was my decision to allow Ivy to use the game under my close supervision.